During my journey I have been lucky enough to have met some pretty incredible people that have inspired and motivated me to recover to the best of my abilities. Some of these whom I have created amazing friendships with!

Michael Forbes: This man was the reason myself and my family attended Project Walk in Carlsbad, San Diego.
Michael Forbes was involved in a serious bike accident just before midday on Saturday 28 June whilst riding by himself north along Beach Rd in Brighton. Michael suffered severe damage to his cervical spine (neck) which left him paralysed from the chest down. After attending Project Walk, he still continues his recovery to this day, 4 years down the track and has made incredible improvements! 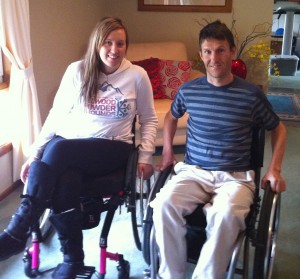 Sam Riggio: In early 1999 while driving home a truck merged into Sam’s lane forcing Sam’s car to leave the road and strike a power pole. Sam suffered horrific injuries which included a dislocated skull and Cervical 1 – 2 vertebra’s including a spinal cord injury at the C-2 level, the same level as Christopher Reeve. Sam also shattered his pelvis, broke his ankle, lacerated his liver, ruptured his spleen, punctured his lung and had parts of his bowel removed.
Paralyzed from the neck down Sam started visualization in the hope he would one day walk again. Unable to feed himself or dress himself Sam remained paralyzed for months, but he never gave up hope! Miraculously a flicker of movement in his hands and legs gave Sam the ignition he needed and through sheer determination and will, Sam started to push himself to regain his independence. After 8 years of being a wheelchair, Sam taught himself how to walk again and walks today with only the assistance of 1 forearm crutch! 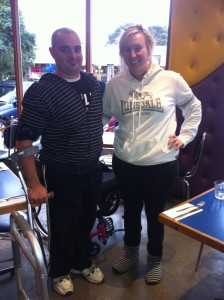 Lucy Coric: In July of 2011, I met this incredible women at our Project Walk Melbourne Gala Ball. Never in my life have I met someone with so much spunk and such a huge heart!
Lucy was injured in a car accident in 1994 that left her a paraplegic. She was told she would never be able to have children, and went on to prove doctors wrong by giving birth to two beautiful children! In the short year that I have known her I have seen her achieve and reach some amazing goals! In a matter of a week she had stood for the first time in 13 years, and then went on to walk at the beginning and end of the Wheel 2 Walk Walkathon held in May this year (2012). She continues to inspire me with each goal she reaches, and is heading over to Project Walk in Carlsbad in early 2013 to kick some more SCI butt! 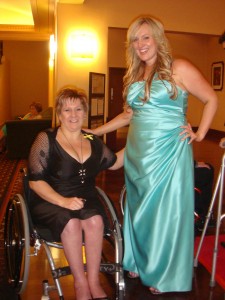 Matthew Reeve: If this name doesn’t ring a bell, where have you been?
Matthew Reeve is the son of Christopher Reeve aka Superman.
On May 27, 1995, Christopher Reeve became a quadriplegic after being thrown from a horse during an equestrian competition in Virginia. He required a wheelchair and breathing apparatus for the rest of his life. He lobbied on behalf of people with spinal cord injuries and for human embryonic stem cell research, founding the Christopher Reeve Foundation and co-founding the Reeve-Irvine Research Center.
Matthew Reeve, , joined the Board of Directors of the Christopher & Dana Reeve Foundation in 2006. Sharing his father’s creative spirit, Matthew plays an active role at the Reeve Foundation, continuing its mission to find cures and treatments for spinal cord injury by funding innovative research, and improving the quality of life for people living with paralysis through grants, information and advocacy. 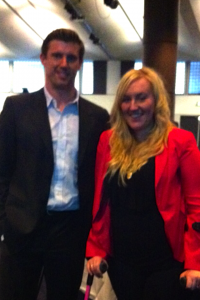