It’s the middle of the week and if you are anything like me you may need a bit of a mid week pick me up!  What better way to put on your favourite beats, relax to your favourite music, watch a film with a catchy title track , sing at the top of your lungs,or even hit the dance floor!

There’s no doubt that listening to your favourite music can instantly put you in a good mood. But scientists are now discovering that music can do more for you than just lift your spirits.

According to DailyMail Uk, research is showing that music has a variety of health benefits.

Fresh research from Austria has found that listening to music can help patients with chronic back pain.

And a recent survey by Mind – the mental health charity – found that after counselling, patients found group therapy such as art and music therapy, the most useful.

Here, are a few ways that music can help our health!

When slow rhythms are played, our blood pressure and heartbeat slow down which helps us breathe more slowly, thus reducing muscle tension in our neck, shoulders, stomach and back. And experts say that apart from physical tension, music also reduces psychological tension in our mind.

In other words when we feel pain, we become frightened, frustrated and angry which makes us tense up hundreds of muscles in our back. Listening to music on a regular basis helps our bodies relax physically and mentally, thus helping to relieve – and prevent – back pain.

The research: A new study from Austria’s General Hospital of Salzburg due to be published in The Vienna Medical Weekly Journal could hold the key to back pain. In the study, 65 patients aged between 21 and 68 with chronic back pain after back surgery were divided into two groups.

Clinical psychologist Franz Wendtner who led the study says: ‘Music is an important part of our physical and emotional wellbeing – ever since we were babies in our mother’s womb listening to her heartbeat and breathing rhythms.

‘Listening to music for about 25 minutes everyday for at least ten days can help prevent back pain and also make you sleep better.’

Which type of music is best? Experts believe any type of classical music such as Mozart or Beethoven can help relieve muscle pain. Calm, slow music is also thought to help.

How it helps: Experts say listening to music during exercise can give you a better workout in several ways. Scientists claim it can increase your endurance, boost your mood and can distract you from any discomfort experienced during your workout.

The research: Dr Robert Herdegen of America’s Hampden-Sydney College in Virginia, looked at the effects of 12 men riding a bicycle for ten minutes while listening to music on one day. He compared it to the same men riding bicycles without music for ten minutes the following day.

Other studies show that listening to music releases endorphins – our natural ‘feel good’ hormones that lift our mood and give us motivation to carry on longer with exercise.

Which type of music is best? The best type of music for exercise is thought to be high energy, high tempo music such as hip hop or dance music.

How it helps: For many people suffering from memory loss the spoken language has become meaningless. Music can help patients remember tunes or songs and get in touch with their history. This is because the part of the brain which processes music is located next to memory.

The research: Researchers from Norway’s Sogn Og Fjordane College compared the effects of live, taped and no music on three different groups of people suffering from post traumatic amnesia – or memory loss.

The patients were exposed to all three conditions, twice over six consecutive days. Results showed that when patients listened to live or taped music, two thirds of them showed significantly reduced symptoms of anxiety and enhanced orientation, compared to the group that didn’t listen to music.

Which type of music is best? Research shows that people with memory loss respond best to music of their choice.

Scientific research has reported that music with a definitive beat and rhythm is able to stimulate brain waves to synchronize with the beat.

So what effect does music have on you? Leave your comments below :) 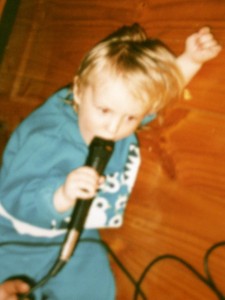 (Music has obviously been in my blood for a long time!)